Kind of a reblog: They might snatch an island

Posted on February 16, 2015 by epamuodikkaitaajatuksia

This blog has to give credit for idea to mr Charly Salonius-Pasternak a researcher for Finnish parliaments international institute. in a recent interview he gave a scenario of snatching island as a possible start of escalating hostilities in northern Baltic sea. This blog is a “study” of what kind of islands Baltic fleet  and VDV might be interested in.

And this is so far my first blog in “third local language” so I wish for some leniency concerning my English and mistakes made in it. 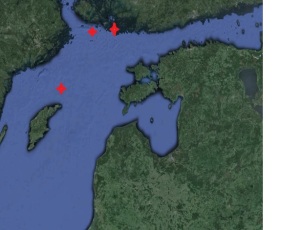 It would seem that leading to NATO-Russia conflict in Baltic region it might be prudent for Russia to try snatch an island in northern Baltic and to station some AS and AA missiles there. This to complicate NATO relief missions into thee Baltic states. This would pose some problems for Sweden particularly and to some extent Finnish Defense forces as well.

I picked three islands or sets of islands in the region that might offer reasonable staging area for a battery of anti surface, particularly anti ship missiles, to threat NATO shipping in area. Battalion of long range AA missiles and close in systems that would be needed to protect these assets from respective nation’s Air Forces. Also room would be needed for approximately a battalion of Naval Infantry to safeguard the island against SF or large scale landing operation.

Some distance from close by other islands would be preferable, but farther out islands tend to be smaller, and thus make extended stay in island impossible. There may not be fresh water and certainly there will not be shelter against storms or other foul weather in small islets.

There was two collections of islands that might fill the bill in Åland Islands, namely Båtskär, Huslandet and Östra Mörskär some distance west from Utö in Turku Archipellago sea. Utö itself, being and old Finnish island fort, offers ready fortifications to qualities mentioned before. And finally Lågskär south from Marienhamn.

These all have the disadvantage of being under 20km from sizeable other islands that Finns might use to haul artillery in and start pounding the fragile missile systems to kingdom come in days time or so. Even an artillery battalion with Naval jaegers functioning as observers from nearby islets would make short work from any such missile systems in island. No need to bother Air Force really. Then some mop up done by Army would sort out such island grabbers quite handily. at least in case that there were no support operations done in mainland to help out island and to hinder Finnish response. I have have every faith that there would be operations to destabilize Finland at the same time, as otherwise the operation would go into naught in two short days.

But Gotska Sandön It is rather large, something like 6 km x 6 km. and it is covered in pine forest. Surface is sand, so making of fortifications and quarters would be quite easy. Closest island is Gotland about 40 km to the south to make direct artillery response impossible (as Sweden to my knowledge doesn’t have a MLRS system). I guess Russians know about this island, as they have grabbed it sometime earlier as well.

Also S-400 system would be able to pick all targets that flew over the Gotland itself and be a threat to any planes that started to close. With some other, maybe Pansir system filling the gaps and doing close by work as needed. Because of the Pansir’s highly mobile nature it would nicely defend S-400 system against HARM, and other airborne threats as well. Add to this P-800 Onix as an AS missile and you have rounded the offensive capabilities of this kind of island fort.

S-400 has respectable range of 400 km, and thus can potentially close of aerospace all the way to Riga. In theory that is. In practice there will be gap underneath in extreme range and target at 10 m height would be picked up at 40 km. So it would closely guard Aerospace around Gotska Sandön  Missiles would not fare so well against maneuvering targets either. So in practice it would complicate things, but would not make it impossible for NATO to build up strength in Baltic States.

But then Sweden would still have to evict the squatters from the real estate. How would they accomplish that? They would have significantly less firepower at their call at the time of landing than their Finnish counterparts. Although their infantry would be largely professional. They would have air cover, but someone would still have to go ground and still fight creme of Baltic Fleets Naval infantry in pitched battle. Naval fire support might be a must in operations such as these. Also this would tie up significant proportion of Armen’s infantry for significant time. And thus would open up possibilities elsewhere. Exalibur raound should extend ARHUR systems range out to 65km, which would be sufficient to bombard Sandön, but Arthur is still in tubes, to my knowledge four systems delivered, and other Swedish artillery systems, well.. Currently there are none.

However Sweden, or Finland for that matter, cannot tolerate breaches of neutrality. Look what happened to Norway in 1940. They could not stop belligerents from using their waters to wage war against each other and thus got to reap whirlwind. So decisive and forceful action would be needed immediately without trying for peaceful solution. Think of Margaret Thatcher and Falklands. Nobody believed they could do it, but do they did.

Of course Åland island and Gotland itself would make maybe even more lucrative targets. But then Russia would have to commit VDV into the game as well. Thoughts anyone?

6 Responses to Kind of a reblog: They might snatch an island