Posted on January 27, 2017 by epamuodikkaitaajatuksia

As you can see from the cardboards after punishment, both guns are extremely controllable, and thus premiere SMGs of WW II

I had to the distinct pleasure of being invited to Nurmo shooting range by the XO  of the EF-security gun store.  Even though I now a days live quite far away from, 650km, form   Seinäjoki it still is “sort of”my hometown and that is why I like to do business with the local gun store. (And Unfortunately Rovaniemi doesn’t have a same kind of gun store) the proprietor was kind enough to invite me to try out couple of submachine guns and P-38 pistol in the indoor range in the town.  I had never before beheld or touched the Thompson  SMG and it has been about  30 years since I have been shooting with the Finnish sub machine gun model 31, or more familiarly, Suomi machine pistol.

Suomi Kp-31 and Thompson SMG side by side. Only PPsh-41 is missing from the “Best SMGs of the war” photo.

Both of the guns where in excellent condition as you can see from the pictures, and they see quite a lot of use as recreational shooting guns for the EF-Security business. If you want to go shoot while you are staying in Seinäjoki you can to book an appointment with Tommi in EF security. They have a nice selection of FA and SA guns you can try out.

And from the business end of things. As you can see the guns are about the same size.

What I know previously about Thompson SMG led me to expect somewhat higher recoil than from a 9 millimeter rounds. As the .45 ACP round this both bigger and heavier than a 9 mm.  But it proved that both guns are quite easy to handle and easy enough to shoot accurately when you limited yourself into controlled, short bursts.  As I mentioned it has been a while since I last shot Full Auto, so I didn’t try full rock and roll to targets. Whit a little of getting used to you could manage a single round in FA action because of Thompson’s bit lower cyclic rate of fire (about 600).  This proved to be quite impossible with the Suomi SMG (Suomi’s cyclic rate is about 900). Best I could manage was about two to three round burst with it which was extremely controllable. You can see Full Auto shooting here, by yours truly. 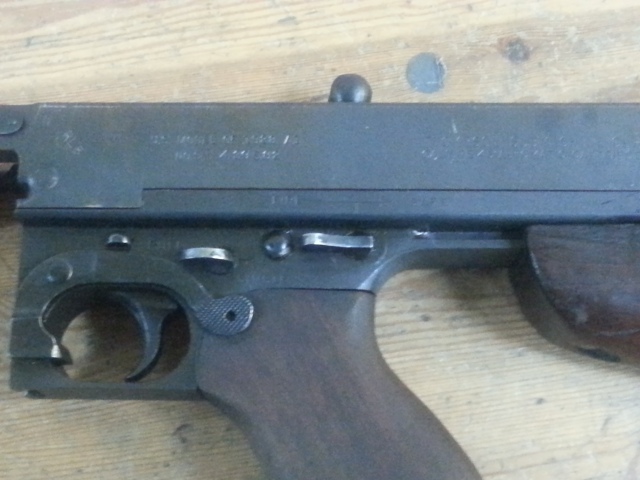 Neither of the gun had drum magazines but the Thompsons 20-round magazines we’re a bit short for my thinking because if you think of how you want to use an SMG you want to have a what cut of suppression capability and as I mentioned the controllable gun but 20 grounds is quite small amount to go to fight with.  A drum mag of 50 rounds will help with this. But of course I do realize that in Wartime use that Thompson had much larger magazines available. Suomis had the “small” 36 rounders with them. There would also be coffin shaped 50 and drum 70 mags available, but I was quite happy with the 36 rounders.

Suomi’s controls: The little “L” shaped lever is the safety and selector Safe-SA-FA. Now on FA.

So I liked both guns a lot, both were stable platforms to shoot and you could see the “Olde World” manufacturing, materials and machining in both guns. The were still in exellent shape,   which most “modern” designs would not after 70 years and >30k of rounds shot would not be. You gotta appreciate the old steel here! Weight of the guns, and of course the girth of yours truly, make these stable to shoot. I guess lighter individual might have trouble with shooting, but any normal size guy should not experience any difficulties.

Funny feature in Thompson is the “perforated” charging lever.

Tommi told me that before the Finland’s first gun law in 1932 quite a few wealthy Suojeluskunta (Home guard) men imported the Thompson SMGs to Finland for their own use. Suomi wasn’t around untill 1930ies and Thompsons first use was 1919, and were freely available. Many well of guys wanted to have a nice SMG for their mome guard weapons so you had a market, and markets tend to fill. This is why there are still quite a few Thompson submachine guns in circulation in Finland.

I do apologize the quality of photos. Didn’t have camera with me so Samsung Galaxy S III had to do the trick. And it seems there is something wrong with my example.