The loads they bear. What can HX-fighters carry?

Posted on October 2, 2016 by epamuodikkaitaajatuksia

I Had a good fortune of being in Tour de sky in Kuopio airfield last June. There SAAB had taken pains to array out the things the current JAS_39C/D can carry. I hope to get back to this later this year on behalf of E/F/G Gripen. I am reapeating myself but post HX Finnish Air Force will HAVE TO field so called wild weasel or Growler type of fighters. The might be refurbished F/A-18 D airframes, if they have life and air hours left in them. OR they can be new built. But the number needed will be around 20% of the whole fleet. OK rant over.

First there are just your run of the mill “smart bombs” in 500kg, 250kg and 125kg variants. These can be guided with laser or by GPS. They do not h

ave much of stand off distance tough, so are usually used against quite helpless enemy on the ground. Think Taleban in Tora Bora. In the picture you can see ordinary Mk 80-series bombs, with GBU-1x Paveway II guiding modules attached. This guiding cuts down the circular error significantly, and thus  cutting down the amount of needed ordnance to desired effect. There is no need make strategic strikes with say 1000 Lancaster bombers against strategic target, say ball bearing plant. In fourties they had to content themselves in bombing citites to deprieve the workforce shelter and thus make them ineffective in work. You could STILL do carpet bombing, but now you can choose which carpet you want to demolish and which ones to stay.

You can also see Taurus KEPD on the background. This is German/Swedish stealthy cruise missile. KEPS range is about 500km and warhead likewise 500kg. Warhead, MEPHISTO, van be used against variety of targets including ships and bridges. Only problem with this missile is that it is rather on slow side. Taurus KEPD could also be fit into Finnish F/A-18s But here is a better picture, where the stealth faceting can be seen. The black bulp is IR/Optical sight.

On the side of the plane one can see the targeting and Air to air arsenal of current generation Gripen.  They are from left to right first IR guided American AIM-9X Sidewinder, European joint IRIS-T. Then radar semi-guided American AIM-120 AMRAAM and the newest western long rang missile in service, and firstly on JAS-39C/D gripen Meteor. Meteor is easy to distinguish by the  air intake it has on it’s frame. This is because Meteor has a ramjet engine, like V-1 missile, meaning that it takes oxygen from atmosphere rather than carrying it in rocket propellant. This leads to longer ranges with the missile. Both Meteor and AIM-120 are semi automatic, so that they get updates from guiding aircraft when they are on way to target. They will turn they own radars on for the last few (tens of) seconds of the flight. They should have rtaher big no-escape volumes, so that should make the highly efficent for 50km out or so engagements. One hast to bear in mind that usually launches against avare and competent opponent result in kill for usually five times out of hundred.

The big one in the back is RBS-15 anti ship missile. IRIS-T and Sidewinder are WVR missiles with approximately 20-25km range. As IRIS-T quite new it has better tolerance of countermeasures and it has larger no-escape 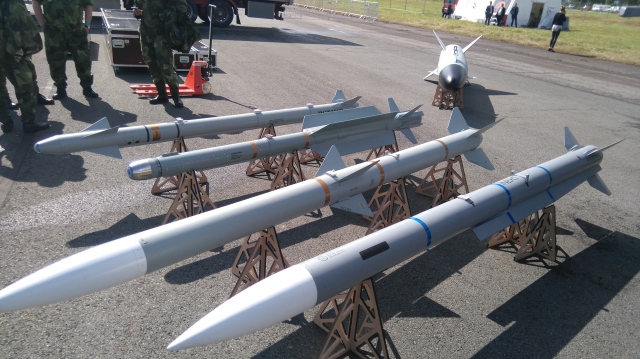 Then we have the targeting and reconnaissance pods. Litening from Israel.