Browning BDM, Nice Piece of Hand Artillery for the Ladies

Posted on September 28, 2017 by epamuodikkaitaajatuksia

As it is easy to see, size 7.5 glove is plenty in handling the BDM.

Tommi, from Seinäjoki’s EF-Security, gave me a Browning BDM to reviev. There is nothing very new about this piece of hardware, but I decided to make a post about it.  As it is a nice shooter and an exellent gun for the ladies or guys without Center sized paws. In fact the gun was so nice, that “My non-combatant loved one” decided to get this piece for herself. Not a bad call by a long stretch!

So the gun in question was manufactured by the Browning from 1991-1998, and was intented to find its way as the service pistol of FBI. That didn’t happen in the end, but still Browning created a nice shooting service 9mm that fit also the smaller hands.

Handling is easy with size 7,5 hands.

The magazine holds respectable industry standard 15 rounds, but the slimness of the butt is gotten from steel construction and not a lot of plastic to wrap around it. As Browning Dual Mode is steel construction thre is more weight than with “modern” plastic guns. If you will spend more time shooting than carrying this is not a bad thing as it helps to absorb the recoil more, but if this is a EDC gun, you may have issues. Empty BDM veights in 870 grams, so about 250 grams more than Glock 19 or 17, It is a third of the weight, and it is like carrying an extra small soda can around. 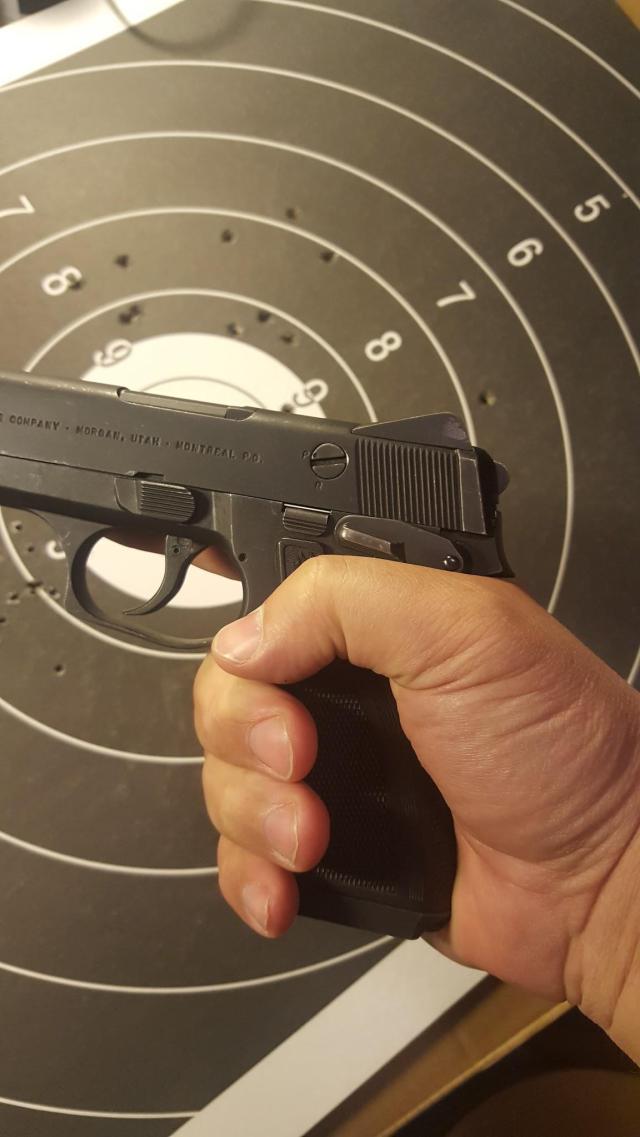 The safety works so that you press it up to shoot the gun and down to make it save.

The funny knob on the side of the gun is a switch where you can choose between “P” or pistol mode and “R” as in revolver, or double action mode. I guess the double action makes the gun safer to shoot, but I don’t think it is really anyway necessary in EDC carry even in FBI duty. Plastic striker fired pistols usually have just the trigger safety, so having a proper safety and stiff trigger is a bit of an overkill.

As I mentioned Browning Dual Mode is nice gun to shoot. it’s trigger is better than with most plastic frames I have shot. This is not to say that it “brakes like glass” in the pull, but there is clear point where it brakes. So while it might not be the best trigger there is in service guns it is still a clear cut better than most of the 9mm service guns there is.

I guess the “sells weren’t there” when big green decided to abolish the BDM, and I don’t might they still be there, but I feel that there IS requirement for service type 15+ rounds mag pistols for smaller handed shooters. So I’m kind of hoping somebody might make a gun like this for future users.